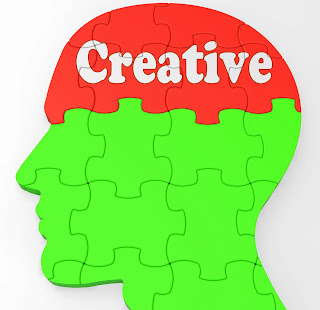 For students making their own content, the team from NYTedu makes a number of suggestions:

Presence matters. “Take us there. Mecca. Antarctica. Yes, take us to an environment, but instead of just seeing it, put us in the middle of it." And don’t just focus on a single experience, but find a way to focus on all that surrounds you.

Comfort matters. VR designers consider the participants as a “guest, not as a viewer." Design "as if you were literally holding your viewers heads." Kevin Alster recommends avoiding the PPS or "potential puke shot” in the design of VR content.

Journalistic integrity matters. “Be a journalist" first. That means designers need to "look and listen more” and “take time to decide what to tell your guests."

Learning matters. The speakers noted the importance of learning learn from each project you undertake. Each time you create, "come up with more…improve over time."

At a recent SXSWedu conference in Austin, however, some of the activities being conducted in the field of user-generated content came into clear sight. Kevin Alster, a learning designer, and Dr. Audrey Heinesen, the VP for product development, both working for the School of the New York Times, provided a presentation on the topic of best practices for user-generated VR content.

At the School of the New York Times, students, budding entrepreneurs, and other interested individuals are able to work with the award-winning New York Times VR Team to learn how to create VR content from scratch. Teaching virtual reality at NYTedu includes design, development, and production in the process, but after running their programs for a full year, they identified some interesting best practices in educational VR content development. 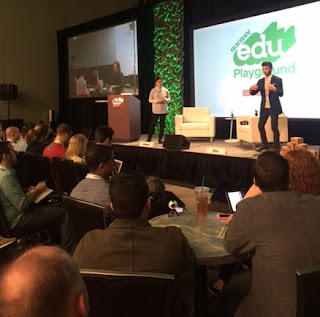 According to Dr. Heinesen, students become excited with “full-on engagement and presence in VR,” but that doesn’t last. Certainly, “VR is just so cool—then we see a drop off.”

What I learned from NYTedu is that, while the content industry dawdles forward, another revolution is slowly gathering steam. Students are heartily learning to craft their own content. Dr. Heinesen concludes: "We have to move from consumers of high quality content to producers of high quality content.” “[We have to] be conscious creators, not conscious consumers.” Watch out, VR content industry! You may play second fiddle.
Posted by Len Scrogan at 1:00 AM No comments:

While recently perusing my LinkedIn feed, I encountered this softly repining graphic: 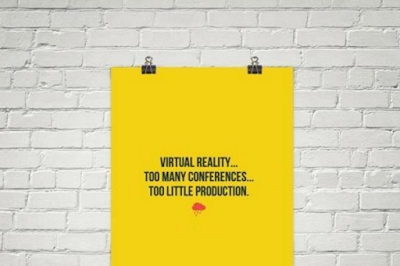 Of course there's more than a smidgen of truth in the notion being alluded to here. I completely get it. Lots of talk at VR conferences, not much content, though. But there may be some sleight-of-hand at play here. While everyone's eyes are on production companies, and their inability to churn out content fast enough for our virtual appetites, the real action is taking place behind the scenes, and on a hugely grand scale. You see, no one is paying attention to the users themselves, many of whom are busy creating the content needed to speed the virtual reality revolution along its way. That's a big mistake, to not pay attention to user-generated content. I guess you could miss if, if you weren't paying much attention. For more insight, see next week's post. 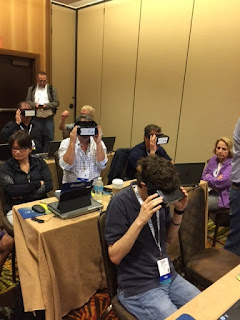 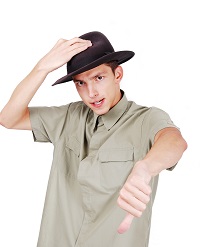 As a result, I left the halls of the Convention Center, writhing in palpable uncertainty, the kind that occurs when hype collides with potential; when exposure to exciting new technology meets with equal parts shudder and disdain.
Posted by Len Scrogan at 1:00 AM No comments: