If the recent ISTE conference—held in the closing days of June in Atlanta—is any indicator of the future, then the education market is alive and well.

ISTE 2014 is the largest ed-tech conference in the U.S., organized by the internationally represented International Society for Technology in Education. At a leadership reception on Monday, Brian Lewis, CEO of ISTE announced that all attendance records were broken during this Hotlanta event. More than 16,000 educators and thousands of additional vendors converged in the halls of the Georgia World Congress Center for a remarkable technology experience.

While past ISTE conferences have always been well-attended, rarely has that attendance spilled over into the exhibit halls. Educators were always there, but many shunned the expo areas. Some likened previous ISTE exhibit hall traffic to working in a bowling alley: “enough room in the aisles to lay down some bowling lanes and curve a few strikes and spares.” Hashtag, sparse traffic.

This year was decidedly different. The exhibit halls were packed with educators, from opening to closing—even in the far remote corners of the expo space. I spoke with some habitual exhibitors, asking them about the quality and quantity of the attendance. “Best I have seen in years,” was one answer. “Second best I have ever seen,” said two more. “Second best to what?” I asked. “Second best to BETT in England,” they responded. (The BETT conference is 4x larger than ISTE, for perspective.)

Most interesting to observe was the wickedly heavy exhibit hall attendance even on the final day of the expo. I have seen nothing like it ever. Last days are for early departure and relaxed strolling down the exhibit hall aisles. Not so at ISTE. From my perspective, the pace was frenetic even on the last day, up to the last few hours. There were still lines to talk to people and slow going in the major arteries.

Some of the traditional display companies were there (e.g. Panasonic, Samsung, Vivitek, Hitachi, Epson, Boxlight, BenQ, and a Korean pavilion ), but I noticed the absence of 5-6 major display companies that, for some reason, did not choose to exhibit this year. Boy, did they miss out. The award for best and boldest new presence goes to the Panasonic exhibit, which offered a fresh, open, striking, and accessible new look for their booth.

On another note, the 3D marketspace was the most vibrant and populous I have seen in 5 years at ISTE. I will cover that story in next week’s post. You will be quite surprised.

Perhaps all this was nothing more than pent-up demand, spontaneously released with easing of our recent economic straightjacket. Or maybe it was because people were happy with the fact that wireless was working reliably for the first time at an ISTE conference, so attendees had more spare time to spend in the exhibit halls. Or just maybe… we are witnessing the education market bouncing back to life. Cross your fingers.

The Future of 3D

At InfoComm 2014, I searched for promising trends, developments, and products in the 3D realm that might offer value for the education world down the line. I certainly found myself poking my head into corners it didn’t belong in! Here’s what I saw that certainly speaks to the future of 3D in education:

Dolby via Infitec. Infitec was showing a Dolby-based passive 3D solution, one which they suggest provides greater visual comfort and works on any screen. As a means to an end, this offering provides three advantages reducing visual strain in 3D instruction, no special screens, and the reduced cost of passive glasses.

Exceptional 3D via AV Rental Depot. Exceptional 3D revealed a brilliant digital signage solution in AV Rental’s exhibit space. This auto-stereoscopic pyramid was unearthly in its potential for higher education data visualization. See this picture and the video I shot:

3D Projector Mapping. Christie’s 3D Projector Mapping solution kept the crowds rolling in. There are many implications for higher ed with this 3D scanning technology they have appropriately entitled a “Digital Sandbox.” Basically, this technology maps physical objects using projectors and then replicates them on a screen for manipulation or for digital printing. 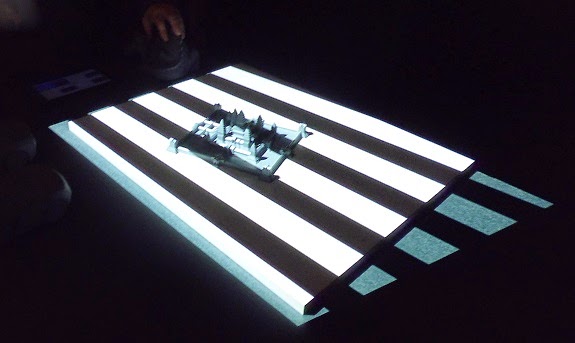 At InfoComm 2014, poking my head into corners it certainly didn’t belong in, I searched for promising trends, developments, and products in the 3D realm that might offer value for the education world. Here’s what caught my attention for immediate application:

Eon Reality’s iCube Mobile. Featured in the Panasonic booth.  the iCube Mobile is a portable, lower-cost “show-and-go” version of an immersive 3D cave or hive. See this video. It worked quite nicely and offers excellent value to any educational setting, because of the mobility advantage.

WorldViz Virtual Reality. There I stood, using Oculus Rift headgear and the WorldViz virtual reality engine, being blithely transported to a truly immersive experience as the bustle of InfoComm 2014 disappeared from my virtual existence. WorldViz was demonstrating applications for their VR development engine and highlighting in print their low cost, portable stereo 3D WorldViz Corner Cave. Both tools, they suggested, offered real advantage for educational applications.  They already have a number of educational institutions and inquiring.  That’s no surprise. See this video:

How much do you know about the creative educators who use educational 3D these days?

Recently, we mined the ranks of ISTE’s 3D Network (formerly known as “SIG3D”) for some interesting analytical data about their membership ranks, data you will be keenly interested in. These data are important, because they inform you about your peers, your customers—your “peeps.”

2014 data is not yet available and it must be noted that 3D Network membership now exceeds 1800 members. Still, based on 2013 data, the largest membership of the 3D Network consists of K-12 teachers, followed by technology specialists (building-level technology leaders), technology directors, and higher education faculty. If you combine the principals and assistant principals into a single category, this demographic is better represented than higher education faculty. 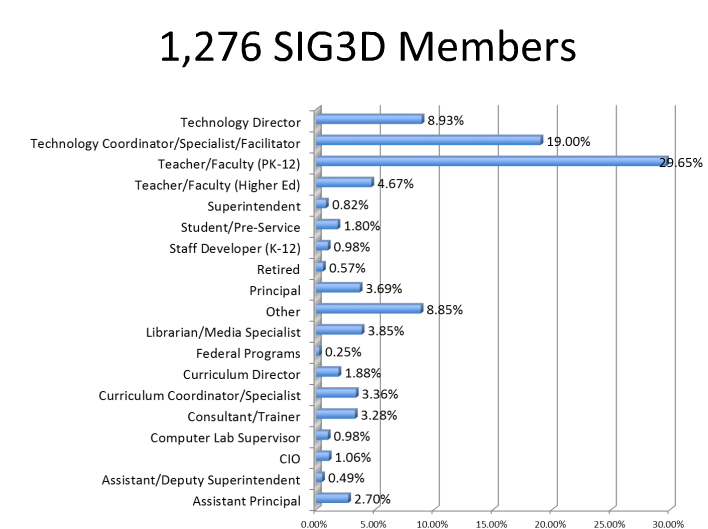 This is a very instructive chart. Interest in 3D is very much grassroots, strongly at the classroom and building level. Leaders, not so much. Not yet, at least. Except technology directors are starting to show interest. That’s good to know. Still—any way you look at it—the 3D Network membership spans a big arena. Overall, it represents a huge canvas to draw on, a large tent of educators. That’s good.
Posted by Len Scrogan at 1:00 AM No comments:

I am often asked the question "What software can I have my students use to make video content in stereo 3D?" There are many options, but here is my short list:

Houdini offers a free apprentice/educator version of this tool used to make most Hollywood movies! http://www.sidefx.com/index.php?option=com_download&Itemid=208&task=apprentice

On a side topic, if you want to get started now and don’t have 3D projectors and glasses, you can start with what I call a precursor 3D experience in stitched rendered 3D through Microsoft PhotoSynth