The strength of Epps’ 3D Academy described in last week’s post is based on the notion that relevance, context and authenticity in learning really do matter. Epps explains:

"We see this as a great opportunity for students to use a 3D skill set to give them a better [and more relevant] understanding of math and science concepts. And what better concepts are there to visualize than the very concepts that they’re weakest in? If they can design it, they’re going to have to understand it. It’s a win-win: the student has now mastered a specific weakness in math or science and the teacher now has a tool that she can use with other students."
Here’s how Epps strategy works: imagine a middle school math student who still struggles with fractions. Working closely with her math teacher, Epps anticipates crafting a design-build project that fortifies the student’s own math skills, while at the same time provides the teacher with a 3D visualization tool that can help instruct other struggling students. In designing this project, according to Epps, our young middle schooler “will soon acquire a better-than-average understanding of fractions that will get her past this unfortunate hurdle in math skills.” (Social studies applications are also possible. During middle school “I made pyramids, burial chambers, and a simulation of the launch and orbit of the Sputnik satellite,” Ben Dibble recalls.)

Asking your students to design stereoscopic 3D learning objects can also leverage improved student performance in critically important science skills. Creating a visual model of the human cell can contribute directly to mastery of learning by students who struggle to understand abstract concepts that they ordinarily cannot see. Asking students to create stereoscopic 3D learning objects that require precise measurement, metric conversion, and tool calibration skills will go a long way toward cementing some of the most critical prerequisite skills in understanding science. 3D design projects also provide a powerful seedbed for improving other building blocks of science achievement, such as tentative explanation, putting raw data into graphical form, and, of course, technical writing.
Posted by Len Scrogan at 1:03 AM No comments:

Return of the 3D Jedi

In a previous post, we introduced our blog readers to the 3D Jedi Knight, Jeff Epps. This post is a continuation of his story, more than a year later.

Jeff Epps, the Director of Information Technology for North Carolina’s Richmond County Schools, has recently formed the G.R.E.A.T. (Globally Ready Engineering and Technology) 3-D Academy. His solution is effectively simple: take on any students who have the interest and aptitude for learning 3-D; connect those students with both a relevant context for learning and supportive classroom teachers; and then leverage that interest to enable students to reach higher levels of performance in science and math.

“You bring us any students that have the willingness to learn how to design 3D content, regardless of their academic challenges, and we can help get them to new levels of math and science, “ he states “—we can turn them into engineers and designers.” One student, Ben Dibble, serves as a clear instance of Epps remarkable vision.

Ben, currently a student at Richmond Early College High, describes his motivation in wanting to make 3D artifacts “to help teachers make students understand concepts better—and I found when I did make things for the teachers, I understood the concept better when I finished also.”

Happily, Epps’ 3D dream is an opportunity open to all children, not just the usual suspects. He observes:

“I felt there were a lot of students that were getting overlooked in terms of talent. There are students that may not be academically talented, but are very well rounded with technology. I thought about launching a program that’s inclusive and not exclusive of students. We are reaching out to females, children of color, and special needs students. One of our top graduates has been accepted to the Art Institute in Raleigh, North Carolina. He has Asperger’s syndrome--and yet he was the best 3D modeler in our district.”
Epps believes that “anybody can learn higher levels of math and science if they just want to. That’s why this technology needs be accessible to all.”

In our next post, we’ll take a closer look at exactly how Epps’ impressive project builds academic and technical skills through relevant, contextual, and authentic learning.
Posted by Len Scrogan at 1:01 AM No comments:

A large-scale European research project, under the leadership of Dr. Anne Bamford (University of the Arts, London, Wimbledon) just been released. The LiFE I (Learning in Future Education) study examined the use of stereo 3D in classrooms in seven countries, including the U.K., France, Germany, Italy, Turkey, The Netherlands, and Sweden. The project involved fifteen schools, fifteen classes, forty-seven teachers, and well over 740 students. This report is free, and available by registering at this link.

It is clear that we are observing continued evidence that the educational advantages of using 3D in the classroom reverberate across oceans and distinct cultures. It appears we are improving our understanding of the way stereoscopic 3D affects the learner’s brain, how it impacts learning in the classroom, and how teachers can leverage this new medium to an advantage.

Clearly, one of the biggest challenges we face in 3D is educating the public. For example, did you know that:
* Based on the American Optometric Association's (AOA) 2011 American Eye-Q ® survey 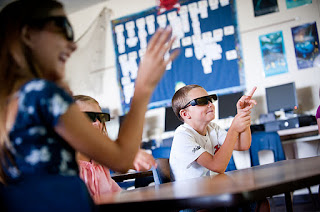 As the K-12 educational advisor and member of the writing committee for the report, I am compelled to say that See Well, Learn Well is not only a significant national health report, but also an extraordinary educational tool for students, parents, schools, universities, manufacturers, and software designers alike. Not only is the main report well designed and classroom ready—Appendix C in the report offers a full range of websites, blogs, and other resources to extend your learning about the benefits of 3D in teaching and vision health.

See Well, Learn Well is also supported by a rich and growing array of behind-the-scenes online resources. Go to 3D Eye Health for great videos and supporting information. This support site offers highly interesting treatments of 3D benefits, the 3D’s of 3D Vision, and how you know when it’s time to see an eye doctor. The site also offers a growing FAQ section with such timely topics as disinfecting glasses and how long a child should watch 3D.

Learn as much as you can. We are all a part of this important educational effort.
Posted by Len Scrogan at 1:01 AM No comments: 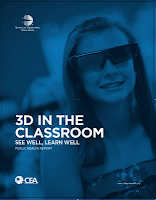 It is important to note that the AOA’s position paper, “See Well, Learn Well.” is considered a Public Health Report. What does that mean? It means that this report carries both consequence and a very hopeful message. It carries consequence in conveying the message that vision matters—in learning and in life. You see, if a child cannot see 3D in the natural world, that child will struggle in reading from an early age—and she will often struggle to see lessons from the back of the room. As she grows older, that same child will be less successful competing in athletics or safely driving a car. Her overall quality of life will narrow, as she will be less able to enjoy the natural world that surrounds her, which is, of course, a 3D world.  The report carries consequence by demonstrating that 3D carries profound implications for improving the nation’s vision health.

The report is also hopeful. It is hopeful because the report suggests that these new 3D technologies offer us a pathway that can lead to more successful educational experiences for our children.  It is auspicious because this technology portends earlier diagnosis of vision disorders. It is promising because it carries with it the remarkable potential for fundamentally eliminating entire generations of eye disorders, such as amblyopia (lazy eye), through early detection.

The message of “See Well, Learn Well” is straightforward. A child is diagnosed with a congenital eye disorder at age five—which is 5 or 6 years earlier than this would normally have been diagnosed. Then there are the stories of those who faced serious academic struggles in school until their natural 3D vision was addressed. The message is not lost on me either. I am legally blind in one eye—the result of childhood amblyopia—so I know what this means at a deeply personal level.
Posted by Len Scrogan at 1:01 AM No comments: