In our Future-Talk BLOG, I haven't spoken much about the 'constructivist' fifth column of our 3D taxonomy—student content creation. But that's about to change. One of the most interesting projects in the country focusing on 3D stereoscopic content creation by students comes out of rural North Carolina's Richmond County Schools.
In 2009, a unique program was started in Richmond County Schools, a rural community in North Carolina. IT Director Jeffries Epps and seven high schools students developed a project to teach students to create 3D models of objects that teachers could use to introduce new concepts during instruction. Epps states, "With only 10 hours of instruction, the students were working with a geometry teacher creating objects and animations that explained the concepts of transitions and rotations. Our i3D Internship was born."

Now more than a year later, Epps and two of the original seven interns have set their sights much higher. Richmond Senior High School is hosting "The Summer of Kainotomia 2010." (Kainotomia is the Greek word for innovation.)  This summer internship teaches students the fundamentals of Java Script Programming, 3D Modeling, and 3D Simulation.  Students from six regional high schools are participating. 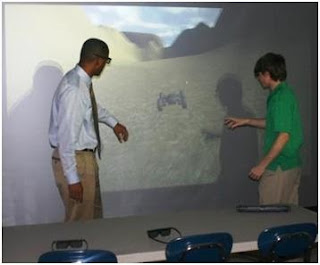 Jeff Epps and Grady Lorenzo, a senior at Richmond Senior High, preview Lorenzo's 3D simulation of a space rover to be used to teach the human circulatory system.
We are building "skills that will allow schools to produce a future-ready workforce upon graduation from high school, skills will look great on a job application or a college application," says Epps. Epps is now looking to establish i3D Teams in high schools and middle schools nationwide. Sign us up, Jeff! (More on that in a later post.)
Posted by Len Scrogan at 8:47 PM