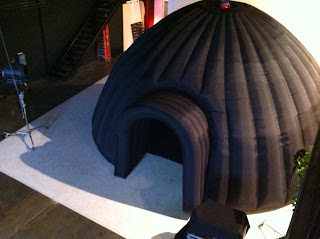 
Volumetric stereo places the user inside the game or experience; and it is totally interactive. Pierce comfortably jests: “We should have a head start on the closest thing to the holodeck, minus tactile feeling, of course.” Pierce also believes that MICOY technology offers another unique advantage: imagine creating a stereo environment with no headaches, no convergence point, no planes, just a natural volumetric environment. “Stereo is not just in front of you from the screen, but coming from all around you,” he explains.
Posted by Len Scrogan at 1:00 AM