The groundwork is just now being laid for the June-July ISTE 2015 educational technology conference, with the fireworks taking place in Philadelphia this year. Last year, this conference was enjoyed by more than 16,800 attendees. Last year’s conference evidenced a solid 3D in education presence (twenty one presentations plus fourteen 3D-related vendors), and this year’s program suggests the same positive trending. 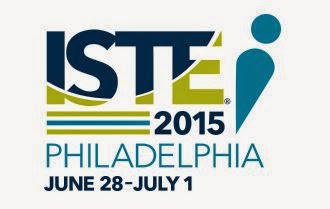 
ISTE’s recently formed special interest group or personal learning network (PLN)—the 3D Network—will also continue its educational advocacy for all things 3D. Now pushing 2,500 members, this group is expected to raise the decibel level of 3D in education by again hosting their popular membership open house, offering an annual meet-and-greet demonstration event, and sponsoring a first-time panel presentation at the conference. The 3D Network is again expected to grow in numbers dramatically. (They are already one of the fastest growing PLNs in ISTE.)

No doubt, many 3D-related exhibitors will also make their presence known on the ISTE 2015 expo floor this year—newcomers and the familiar folks alike. Companies wishing to have a presence at the 3D Network meet-and-greet demonstration event—in person or with literature—should contact this blogger sooner rather than later.
Posted by Len Scrogan at 1:00 AM