In my last post, I asked “How can schools and universities address the acute hygiene problem” presented by shared school resources like VR headgear? I remembered a posting on the nearly 12,000 strong VR/AR Media Group on LinkedIn, to which I paid little attention at first, but which now grew afresh in my mind. Apparently, Uvisan (a UK company) rolled out a noteworthy UVC cabinet touting the highest photobiological safety ratings. I interviewed Anthony Graham, Distribution Manager for Uvisan, who emphasized: “All of our equipment has RoHS and CE certification and UV efficacy has been subjected to extensive laboratory testing to guarantee maximum effectiveness.” 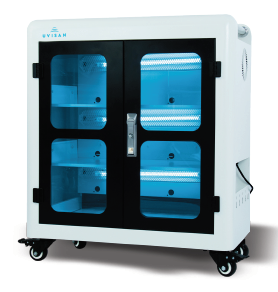 The history on this product was fascinating to me. Immotion Group, a UK-based out-of-home VR company, had apparently developed a "Pre-covid" UVC cabinet for MGM, owners of Mandalay Bay in Las Vegas as part of a 36 seat motion platform VR Theatre in their their Shark Reef aquarium facility.  The ‘disinfecting’ cabinet technology enabled Mandalay to sanitize and simultaneously charge the headsets between showings of Immotion’s undersea VR short films. Then, as the pandemic spread, Graham recounted “we decided to put the research and effort that went into our cabinets to good use and create Uvisan as a stand-alone solution”. As the Covid crisis expanded, Mr. Graham rationalized that “the short disinfecting cycle, charging and security capabilities made it a perfect fit for many organizations”. Graham underlined that their UV anti-bacterial cleaning cabinets will support much more than VR headsets: tablets, tools, AV equipment, and phone headsets are also now supported.  [I would expect that this could also apply, in an educational context, to headphones, earphones, science probes/apparatus, utensils, and other instructional instruments used by waves of students.]

As far as the VR origins of this product,  Graham noted that “the cabinets were originally designed for VR Headsets, and we have a range of sizes that can house, sanitize and charge 12, 20 and up to 30 headsets, using our specifically placed 254nm low pressure medical-grade UV lamps to give maximum surface coverage.” But he added that the Uvisan cabinets are alternatively able to support up to 100 phones and 50 tablets. I asked Mr. Graham about any educational customers that were using this tool, and he responded “We have Chichester University and London College of the Arts using our cabinets in an educational setting and enquiries from others coming in daily.” He also mention the installations thye had in place with the Academcy of Applied Sciences in Germany. Graham also offered this case study on the Chichester implementation.

Some other customers who have found this solution particularly valuable include the VR sport business HADO (who told Graham that “they could not have run a championship event unless they had the cabinet to rapidly sanitize the headsets”) and the British Film Institute, who recently used their cabinets at a VR event which was part of this year's London Film Festival.  Graham concludes: “We have a very versatile, safe and effective product and we are now seeing demand coming through from healthcare and industrial partners.”

Can educational institutions afford this solution? It's an attention getting offering....