Enter WhooshVR. These folks are chiefly known for Whoosh3D, a 3D-enabled 9H tempered glass screen protector which comes with its own app.  Whoosh3D enables a conventional smartphone or tablet device to create, convert, stream, and display 2D and stereo 3D content, in a glasses-free format.  But WhooshVR is a pleasant addition to their platform, something I see as having high potential in the education market.

Basically, WhooshVR is an app that enables a conventional phone to capture a

2D photo with a single click, convert it to 3D VR format, and create tilt-view VR photos and video, whereby the edges of the frame expand beyond one’s peripheral vision. Its current photo capture constraint is 140 degree FOV with a phone’s camera and 180 degrees with a fisheye lens.  Interestingly, all photo capture is via a single photo shot; I do not need to rotate the phone or exhibit socially awkward photo capture behaviors, thank goodness. According to Simon Gemayel, CEO of 3DVT: “We're changing the face of  VR content by shifting people from being content consumers to “content creators” simply by using their phone – the camera we all carry around in our pocket – and using it in a way which is natural to human behavior; photo capture with a single click.” He gleams:   “This is a powerful change in paradigm.  Never before has 3D and VR3D been so simple, so affordable, and so accessible. “ 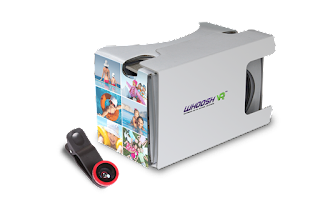 The introductory app is free, yet basic. Users can upgrade for additional features, such as the ability to capture 180 and 360 without a fisheye lens; and to access virtually any photo from their device’s own photo and video libraries.  The upsell version will also allow users to access VR and 3D content on YouTube.

From the perspective of the consumer, I see this as a low-cost and non-complicated way to capture 3D pictures and video, enjoying the ability to click through a mass of images using my VR headgear or the auto-stereo display. I can print what I see on a either a color printer or 3D printer and can email or post my images from the app. From an educator’s perspective, I like the hands-free use, enabled through gaze control on an onscreen dashboard. The intuitive dashboard allows immediate depth editing, zooming, and quick visual tweaking. In my way of thinking, it provides an easy way for the youngest children, or beginning students at higher levels, to jump right into the fray, using a tool I consider a valuable precursor to more sophisticated and time-consuming content generation tools.