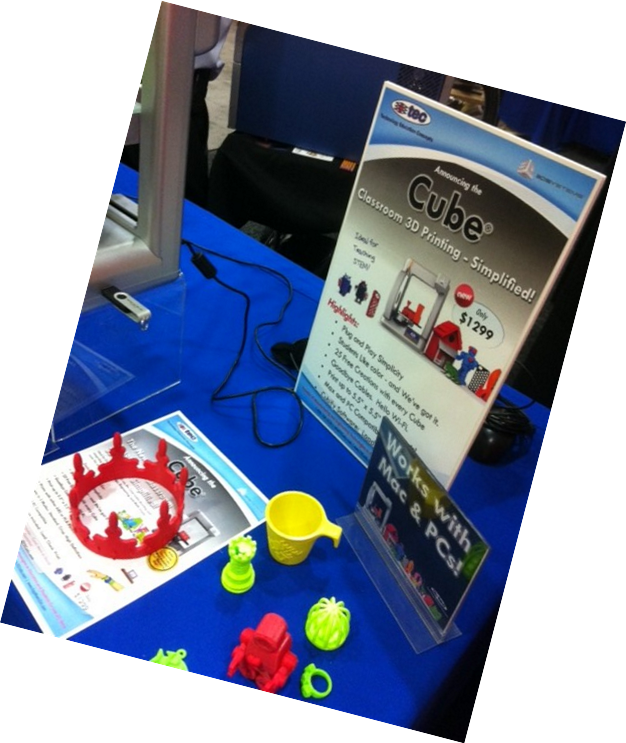 3D Printing Maneuvers into Schools
In schools, printing in 3D does seem to be following expected routines of adoption, patterns that are quite familiar to those of us in the education space:

Peppered Interest.
Interested schools, curious principals, or impassioned teachers just buy them. You may find one, two or three 3D printers peppered around a school district—largely in the hands of a well-funded innovator, a magnet school, or a well-connected charter school.

Concentrated Interest.
Like some school districts I know on the East coast, leaders have concentrated 3D printers at a single grade level. For example, every high school has a 3D printer in one district, but none in any other schools. In another example, every middle school has been outfitted with a makerspace (included with that, a 3D printer); but none exist in elementary or high schools.

Laser-focused Interest.
Some districts I know in Texas are afraid of the high price tag of 3D printers—and the voracious costs of consumables, so they purchase a single high-end 3D printing solution for their regional career and tech center, while forbidding local schools to make similar investments. If other schools want to do printing in 3D, they can contract with the regional career and tech center.

Over the last year, I have attended every 3D-printing session possible at national conferences. I have even presented a few. And here’s what I know: It’s still largely in the marching band phase; there lots of folks buying these, but they are still not sure how to use them well, nor are they well equipped to handle the ongoing costs or TCO. BYTK.


There are a number of super stars, doing amazing things with printing in 3D, but they are hard to find. Both ISTE and COSN are among the organizations hoping to corral these folks and create venues for sharing, growing, and disseminating educational successes.
Posted by Len Scrogan at 1:00 AM